First off... this is for Pete who needs educating in all things Blondie...

I'm going to be having my connections fiddled with this weekend, so I don't know what will become of me. Hopefully I will be back - faster and looser...
Meanwhile, here is a musical interlude and a reminder to practice, practice, practice...
Posted by Ms Scarlet at 15:10 40 comments:

The Fabric of Life

This is an oldie. I loathe this advert so much that it almost gives me pleasure - kind of pervy I know. The central character in this ad is Carol and she’s an out of work dentist from Harrow who’s dumped herself on Wayne, a billionaire playboy from Wigan. Wayne pulled her at a hot nightspot called ‘Sandy’s Plaice’ in Wigan High Street, which is highly regarded for it’s sea-food platter and salty ambiance. Wayne, as we can see, is a little worried cos he only meant for her to stay for one night but now she’s moved in all her stuff and has turned his box room into her own personal closet. He’s kind of resigned himself to her presence; she’ll do for now and she has her uses, such as doing the laundry. Anyhow, in this scene we see Carol having a hissy fit because she can’t find anything nice to wear for a big night out with Wayne; she’s throwing all her designer clothes about and stamping on them, that is until she has a brilliant idea. She heads to the kitchen, and from the washing machine she pulls out Wayne’s best white shirt [Armani]. We know it’s been washed in Bold 2in1 because she comes close to orgasm when she sniffs it [we’ve all been there]. Wayne's been waiting for her for ages and keeps looking at his watch, but he’s too scared to say anything other than: ‘you look fine’ and ‘no, of course it doesn’t bother me that you’re nicking all my clothes’. What the hell, she’s a cheap date who gets off on washing powder.
Later we see the happy couple arriving at an exclusive Wigan restaurant. Carol chucks her coat at a nearby cloakroom attendant and struts her stuff as bold as brass; she’s definitely on the dazzle and has overdosed again. And Wayne? Wayne’s quite happy - he knows exactly what she’s gonna do for a smear of comfort and a dab of lemon fresh Persil.
Posted by Ms Scarlet at 10:28 45 comments:

Blimey, I've been given a Lemonade Award from CyberPete . This is awarded to blogs with attitude and gratitude. I'm blushing. I think I probably have more gratitude than attitude. Anyhow, to celebrate, I'm going to combine my Lemonade award with Jukebox Monday! Yey! So thank you Pete, this one's for you . . .

. . . and for everyone on my blogrol, who also deserve this bright shiny fizzy Lemonade award . . . 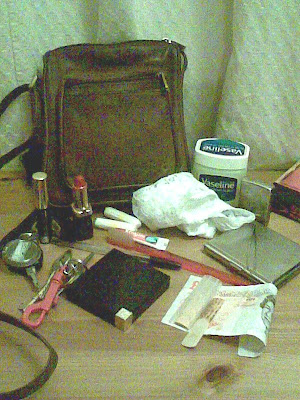 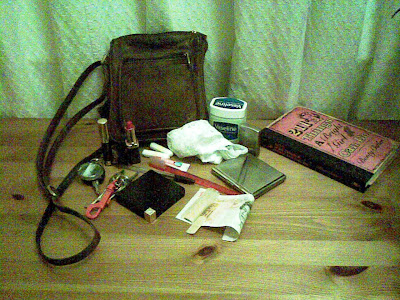 This is the functional bag that I sling over my shoulder on a daily basis. I apologise for my camera phone pictures. They're crap. Anyhow, the contents of the bag are as follows:-

Red Lipstick; Estee Lauder compact; a tenner; tampons; spare knickers, toothbrush and mini toothpaste [well you never know]; cigarette case and lighter [after three years I've started again]; tweezers; lots of keys - house and car; well tongued alto saxophone reeds [Vandoren 'Jazz' no.3]; vaseline [for emergency eye-lash conditioning]; book - '211 Things A Bright Girl Can Do' by Bunty Cutler [hints and tips on life and everything from 'how to make yoghurt in a thermos flask' to 'how to swing upside-down on a trapeze']

I will kick off Jukebox Monday, but as I have lousy/cheesy taste in music I'd rather play requests in future, so any suggestions are welcome for a regular Jukebox Monday slot.

Also, something to ponder on . . . a question was raised in my previous comments box, which was: Do lips deflate as they get older? Thanks to Kaz for making me ponder this . . .

For Mrs P and Daphne Wayne-Bough

This is for Mrs P and Daphne Wayne Bough at Chocs Away
I for one will be very sad to see either of you go. Apologies for this God forsaken record... but you've both driven me to it... it's your own fault.

‘Here come the girls...’ is the chant from the new Boots Christmas ad; it’s theme is to show how much better women are at organisation than men. And it looks like we’re back in the office again as we are shown a group of women in the advanced stages of ‘Secret Santa’; they’ve each pulled a colleague’s name out of a hat, and now they’re all stampeding, like a brightly coloured herd of cattle, to Boots to buy cheap and cheerful goodies for Christmas. One of the blokes in this ad is shown to be so incompetent and incapable that he is seen trying to wrap up his stapler as a gift. Part of me dislikes this ad because I think it encourages men to wallow in the myth that they are useless at choosing suitable gifts and therefore discourages them from putting any effort into doing any Christmas shopping. Basically women get lumbered with present finding. It’s not on. Being a man is not an excuse to be useless.
Anyhow, I like that this ad is set in an office, and I like the tune, but I think that Boots are missing out all the good bits that only happen at Christmas, so I suggest a ‘Here come the girls’ sequel. In the sequel, Boots join forces with the people who make the alcohol awareness information films, and together they show the true horrors that are unwrapped at the annual Christmas do.
Firstly there is always a weeping wailing woman who sobs into her soup for 3hrs, making horrible stains across the table cloth. In a drunken stupor she confesses, loudly, that she has been sleeping with the Group Operations Director for the last 3 months, but now he’s dumped her for the bright and shiny, brand new 18yr old receptionist . . .
Then there’s the couple who’ve been winding each other up into a sexual frenzy throughout the year with frustrated fumblings and seductive teasing. At the Christmas party they cross the line of no return resulting in ripped shirts, laddered tights and lost knickers. The next day he brags and she denies. It takes another 6 months of meaningful glances and breathy tension before they do the exact same thing at the company cheese and wine soiree. Eventually they get married. And buy a bungalow.
Finally there’s the drunken blonde floosey, whose party piece is to snog everyone under the mistletoe and declare undying love, forever and ever, to anyone who’ll listen. She then takes it upon herself to entertain her colleagues by scrambling, unassisted, onto the table to belt out a rousing chorus of ‘I Will Survive’, just before flashing her tits at her boss and throwing up into his lap . . .
Oops.
Posted by Ms Scarlet at 19:19 46 comments:

Okay, before I get on and write a proper post, this is my last word on embarrassing records . . .

Also, if anyone has any suggestions as to where Mrs P and I should go on Friday, then please let us know. I think there might be pictures and a slide show available for purchase after the event.
Posted by Ms Scarlet at 11:43 33 comments:

Right, think I need to cheer things up a bit and Emma has helped because she has tagged me. This time I have to name my most embarrassing record. Unfortunately Youtube won't let me embed this particular link, so please click here
It's embarrassing because my boyfriend and I were both punks. And yes, we used to listen to it together, dressed in all our finery, and yes, we both knew all the words . . .

I'd like to tag Dr Maroon because he loves music; Inkspot because he will find it a challenge; MJ because she's Canadian; Kate because . . . well just because, and Boyo because it'll give him something to do . . . Oh, I would have tagged Gadjo as well but he hasn't got sound . . . Oh flipping 'eck can I just tag everyone?
Posted by Ms Scarlet at 12:42 58 comments: 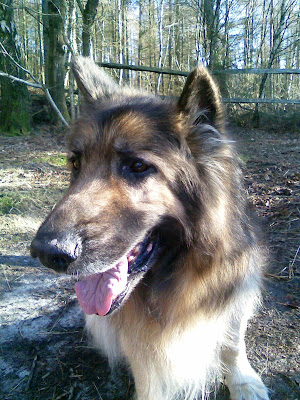 I was looking for BBC Potter's Wheel Interlude, but then I found this . . . Things were much scarier in the past . . .

Ms Scarlet
I am permanently perplexed. 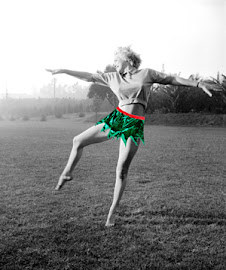 Scarlet wearing the FGES [Many thanks to Mr XL] 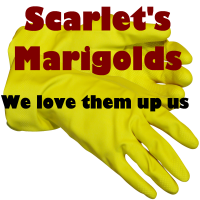 Many thanks to Mr Whirly.